The Central Luconia Region, in the shallow waters of Offshore Sarawak, is a major gas province that has reached exploration maturity.  Since the drilling of the first exploration well in 1968, more than 110 wildcat wells have been drilled, discovering a total resource in excess of 50TCF gas in-place.  The overwhelming majority of the gas has been discovered within the same play: Late Miocene carbonate build-ups.

An Aggressive 3-Year Commitment for SK408

Sapura Exploration & Production (formerly Newfield Malaysia) has been an active explorer in the Central Luconia Province since 2007, to date drilling 8 operated wells and discovering a total in-place gas resource of approximately 6 TCF in 7 discoveries. In December 2012 the SK408 PSC was signed (with JV partners Petronas Carigali and Shell) with an aggressive 10 wildcat well commitment.

Despite a long run of poor results preceding this time, Sapura E&P recognized that a large number of undrilled carbonate prospects with significant potential remained.  In order to meet the commitment drilling schedule Sapura E&P focused on quickly understanding the critical success factors for the play in order to prioritise the remaining prospects in readiness for a campaign drilling approach.

After a regional assessment of failure mechanisms across the different types of carbonate structures it was concluded that lack of charge was the principle cause of failure in carbonate structures similar to the prospects of interest in SK408. Specifically the lack of an underlying structural focus was shown to be the key discriminator between failure and success.  In a change to the existing paradigm, failures caused by seal or “thief beds” were thought to be a secondary factor.

Within 18 months of signing the PSC, a highly successful 5-well drilling campaign in early 2014 resulted in 5 gas discoveries. The perception that the Late Miocene Carbonate Play had run out of steam was reversed and our confidence in the simple geological models underpinning Sapura E&P's approach has increased.  These models, along with additional learnings from phase 1 are being integrated in preparation for the SK408 phase 2 campaign in late 2015. 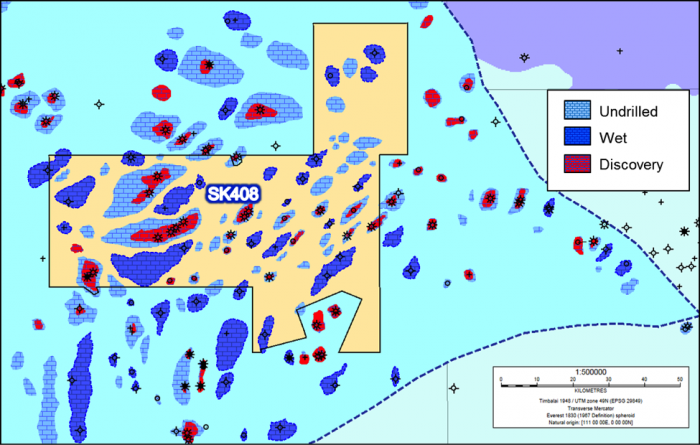